Puerto Maldonado is a city in Southeastern Peru in the Amazon forest on the confluence of the Tambopata and Madre de Dios River, a tributary of the Amazon River. Nearby we can find the Manu National Park, Tambopata National Reserve, and Bahuaja – Sonene National Park. These are some of the most pristine primary rain forests in the world, which include several oxbow lakes and clay licks, where hundreds of birds including macaws feed on clay. 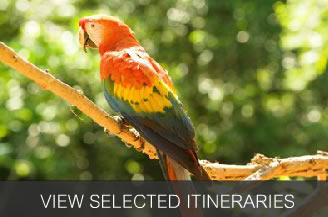 There are a number of Puerto Maldonado lodges that provide adventure into the amazing Tambopata Reserve. Exciting excursions around the area include day boat trips on Sandoval Pond, where you can see vibrant macaws, loud red howler monkeys, large anacondas and drowsy turtles. Tourists can also walk above the treetops during a cover trip. Search for caimans in the evening on the river’s edge by checking the shoreline with headlamps and lights to get the expression of the light in the dog’s eyes. Other evening trips are an excellent way to see animals like frogs, bugs, and other night animals.

Michel – thank you so much for your efforts and those of your staff and guides. We had an amazing time visiting your country and learning and experiencing many new and wonderful things. We particularly appreciated the opportunity to meet with the family in the highlands and spend… END_OF_DOCUMENT_TOKEN_TO_BE_REPLACED

Your tour company, Peruvian Odyssey, took care of us from the moment we arrived to the moment we left. We were pampered, expertly guided, watched over and treated like VIPs the entire time. It will be hard to take another tour in other countries (do you offer tours in other coun… END_OF_DOCUMENT_TOKEN_TO_BE_REPLACED

We arrived at home last night – safely and full of wonderful memories. We are remembering all the special things your company did to make our trip such an amazing adventure. Thank you, thank you for a perfect trip and such special memories! And please thank all the people w… END_OF_DOCUMENT_TOKEN_TO_BE_REPLACED

We thoroughly enjoyed our 16-day vacation trip that Peruvian Odyssey and both of you so ably helped us plan for this past summer. Your company and its representatives, guides, and drivers expended extensive efforts to help us tailor the itinerary to our particular interests in ar… END_OF_DOCUMENT_TOKEN_TO_BE_REPLACED

Joe and I want to specifically thank you for arranging our visit to Cusco and the Sacred Valley. Not sure who in the company did what, but the graciousness of you, your family, and your Peruvian Odyssey Tour Company was greatly appreciated by us and Melissa and Dennis. Everything… END_OF_DOCUMENT_TOKEN_TO_BE_REPLACED