Located between Peru and Bolivia, Lake Titicaca is the highest navigable lake in the world and one of the most fascinating destinations in Peru. Situated at a very high altitude, at over 12,503 feetabove sea level, Lake Titicaca is considered a sacred place for the Inca civilization, as the Incan mythology says that the first Inca king, Manco Capac, emerged from this lake. You will have many places to discover on the shores of Lake Titicaca, as well as on the many islands that exist on the lake. A tour at Titicaca is definitely an unforgettable experience for any visitor. 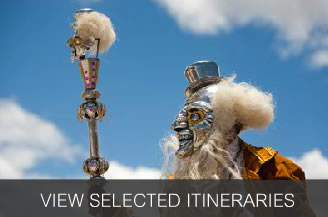 Considered the folklore capital of Peru, Puno is immensely rich in music, dances, customs and legends.One of the most symbolic celebrations in Puno is the Festival of the Virgin of Candlemas, which is held during the first half of February. Different groups of dancers compete in a colorful dance, the Diabladafamous for its costly masks and costumes.

Michel – thank you so much for your efforts and those of your staff and guides. We had an amazing time visiting your country and learning and experiencing many new and wonderful things. We particularly appreciated the opportunity to meet with the family in the highlands and spend… END_OF_DOCUMENT_TOKEN_TO_BE_REPLACED

Your tour company, Peruvian Odyssey, took care of us from the moment we arrived to the moment we left. We were pampered, expertly guided, watched over and treated like VIPs the entire time. It will be hard to take another tour in other countries (do you offer tours in other coun… END_OF_DOCUMENT_TOKEN_TO_BE_REPLACED

We arrived at home last night – safely and full of wonderful memories. We are remembering all the special things your company did to make our trip such an amazing adventure. Thank you, thank you for a perfect trip and such special memories! And please thank all the people w… END_OF_DOCUMENT_TOKEN_TO_BE_REPLACED

We thoroughly enjoyed our 16-day vacation trip that Peruvian Odyssey and both of you so ably helped us plan for this past summer. Your company and its representatives, guides, and drivers expended extensive efforts to help us tailor the itinerary to our particular interests in ar… END_OF_DOCUMENT_TOKEN_TO_BE_REPLACED

Joe and I want to specifically thank you for arranging our visit to Cusco and the Sacred Valley. Not sure who in the company did what, but the graciousness of you, your family, and your Peruvian Odyssey Tour Company was greatly appreciated by us and Melissa and Dennis. Everything… END_OF_DOCUMENT_TOKEN_TO_BE_REPLACED